An Open Letter to the D.C. City Council: Commit to Initiative 77

On June 19, D.C. voters passed Initiative 77, a ballot measure that would raise the minimum wage for tipped workers to that of non-tipped workers. But instead of respecting the will of your constituents, you have introduced a bill to nullify their efforts. We urge you to reconsider this bill and allow Initiative 77 to stand.

The primary reason given for nullifying Initiative 77 is the erroneous belief that requiring equal wages for tipped work would result in economic harm to both businesses and workers. The argument, set out in decidedly apocalyptic terms, is that business owners would have no choice but to offset their labor costs with increased prices, resulting in less customers, lower tips, and, ultimately, businesses being forced to close. Therefore, to preserve their jobs, tipped workers simply must continue to tolerate a system of unequal wages.

This doomsday scenario is not borne out by data from the states that already require one minimum wage for all employees, which have shown higher rates of tipping, increased per capita sales, and above-average employment growth since converting to one equal wage regimes. In fact, there is little evidence that minimum wage increases have a significant impact on employment, as confirmed by a meta-analysis of over four decades of studies on the subject. Increased productivity, decreased turnover, and modest price increases have proven sufficient to counteract any increased labor costs, which comprise only about 30% of the average restaurant’s operating expenses. By contrast, in the current, unequal system Initative 77 seeks to protect, the fluctuating nature of tipped income provides the perfect cover for unscrupulous employers to commit wage theft, that allows them to simultaneously cut and mis-report labor costs.

We are also deeply concerned by the pressing civil rights issues connected to Initiative 77. The restaurant industry has been dubbed an “occupational Jim Crow” because of its wage disparities and preferential treatment along race and gender lines. A recent study found that people of color earn 56% less than their white coworkers, even when controlling for qualifications and experience. (We note that the most strident anti-77 voices come from fine dining establishments, whose highest-paid workers are white men.) Meanwhile, people of color are overrepresented among D.C.’s tipped workers, who experience poverty at nearly twice the rate of all D.C. workers. The tipped minimum wage system also has gendered consequences, as women who work for tips are twice as likely to live in poverty as their male counterparts. Unsurprisingly, Initiative 77 is disproportionately supported by people of color and those living in poverty.

In the era of #MeToo, it is incumbent upon you as public servants to pay particular attention to the fact that forcing women to rely on tips for income creates the perfect environment for sexual harassment, which is illegal, immoral, and already rampant in the food and beverage industry. Tipping not only makes servers more vulnerable to abuse but forces them to tolerate predatory behavior from customers and management alike, that include harassment, sexual assault and rape.

The capital is no exception; over 90% of D.C. restaurant workers report sexually harassing behavior in the workplaces. In states with a sub-minimum wage for tipped workers, these people are twice as likely to experience sexual harassment and three times as likely to be pressured by management into objectifying themselves by their managers. Even non-tipped workers report higher rates of harassment in states with a sub-minimum wage. Clearly when government sanctions exploitation, it tacitly fosters an environment more tolerant of abuse of all workers. It would be more than disappointing for you to overrule your electorate on a policy that has the potential to cut both sexual harassment and poverty in half. It would be an open dereliction of duty.

This effort to repeal Initiative 77 is even more indefensible in light of the big business interests with deep pockets that are behind it. The National Restaurant Association (NRA) was the largest contributor to the campaign against Initiative 77 and has spent a staggering $42 million over the last decade to aggressively lobby for its agenda — namely trying to stop minimum wage increases. Closer to home, we must wonder if the $236,013 you and the district’s mayor have received from anti-77 organizations over the last two campaign seasons has persuaded you to side with corporate interests over the protection of and even basic respect for your most vulnerable constituents.

Here is the bottom line: On June 19, a majority of D.C. voters who went to the polls on Election Day supported an initiative that could potentially reshape the city into a more equitable and livable environment for thousands of its workers. But your response, which attempts to undo the will of the people, is an affront to democracy. In a recent poll, 80% of D.C. residents expressed concern that their vote might potentially be overturned. It would be wise to listen to the very people who elected you into office and whose taxes pay your salaries. We urge you to work with stakeholders to smoothly transition D.C. to one equal wage.

Our nation’s capital should lead the way in protecting workers. Initiative 77 must stand.

Note: This article was also published in Medium. 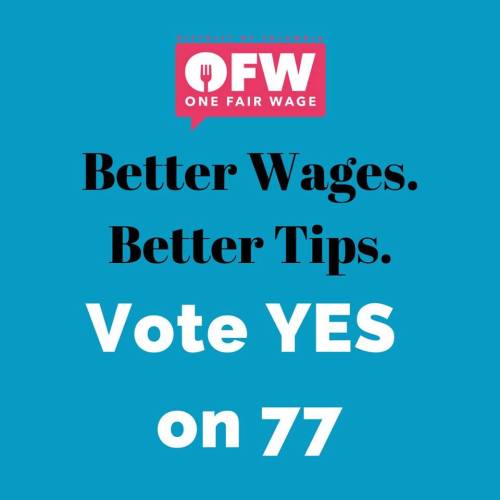