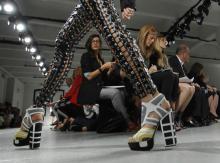 Rodarte, Spring 2013. Gorgeous and stunning, now … who made them?

Fashion Week 2012 just wrapped up, and I always love the opportunity to lose myself  in the fantasy world of haute couture for just one short week. This year it was Vivienne Westwood’s steampunk-inspired collection, the ethereal draping of Carlos Miele’s clothes, the op-art, mod-inspired fashion of Marc Jacobs, and the punk-rock gypsy aesthetic of Anna Sui (always a favorite of mine) that made my heart race. Even the shoes worn by audience members this year were so unreal, that if the pictures weren’t shot by my heart, Bill Cunningham, I would have assumed they were photo-shopped. (I want five inch yellow Prada shoes with flames shooting out of them, NOW daddy!!)

But while the fashion press focused intently on the genius of these designers, as well as the important faces in the audiences that ran the gamut from Anna Winatour to Kim Kardashian (ugh), very little was mentioned about the fire in Pakistan at a textile industry that killed more than three hundred workers. Supposedly (and I’m sure more information will be revealed as the investigations move forward), the factory employers locked the doors of the factory to prevent the workers from stealing the jeans they were making. And what is even more shocking is that this factory was declared as safe by monitors working with Social Accountability International, which is a nonprofit monitoring group largely financed by corporations. And of course, despite finding a pair of Guess jeans and other brand-name labels in the wake of the fire, producers, including Guess, are denying that their jeans were made there.

Is it ironic that as I’m reading this article on the fire, which killed more than twice as many workers as the famous Triangle Shirtwaist Factory fire in 1911, a gorgeous advertisement of a beautiful model wearing  layers of bracelets and a glittery sequin top for the brand Armani flashes across the screen? The fashion industry in a nutshell—beauty and fantasy, alongside tragedy.

What this reveals is obvious: the need for more transparency in the design process, and for more sustainable labor practices. As long as those who make the clothes are not given a face, people—the designers, the fashion editors, the consumers—will continue to look the other way. A recent article in The New York Times documented the fashion industry’s “25 key players,” which included the founders of the globally-influenced retail store Opening Cermony, Vogue editor Anna Winatour, and my personal favorite, ‘I got famous for a sex tape and now my face is plastered on every freaking ad on every website that Nadia visits’ Kim Kardashian (UGH). And where are the textile workers in this list? I find this more than a little ironic considering that the haute couture industry defends its high price tags on the basis of its ‘fine’ craftsmanship and supposedly fairer labor practices (though it’s recently been revealed that the ‘made in Italy’ label is kind of a sham-those who labor in these Italian factories are often Chinese migrants exploited by their employers). Shouldn’t they be proud to reveal the names and faces of their workers who help make their dazzling shows a reality?

There are two main issues at play here. First, the fashion industry, with its reputation for glamour and beauty, doesn’t want to be bogged down with the gritty reality of the exploitative labor it employs.  Many designers are considered artists, and artistry and labor politics don’t exactly mix well. Secondly,  the transnational nature of the fashion industry makes it difficult to find any particular person or system entirely culpable. As the fire in Pakistan reveals, regulations are difficult to enforce in an industry that stretches across multiples nations, means of labor, and forms of presentation. Perhaps that’s why when 29 people were killed in a factory fire that produced Tommy Hilfiger clothing last year in Bangladesh, no one blinked an eye when Hilfiger himself was chosen just one month later as the fashion consultant for American Idol, giving style advice to irritated-looking contestants. After all, he couldn’t have known that his factories were shady, right? If he did … he would have done something about them, right? Sometimes, the worst crimes committed are the ones that happen when we aren’t forced to ask questions.